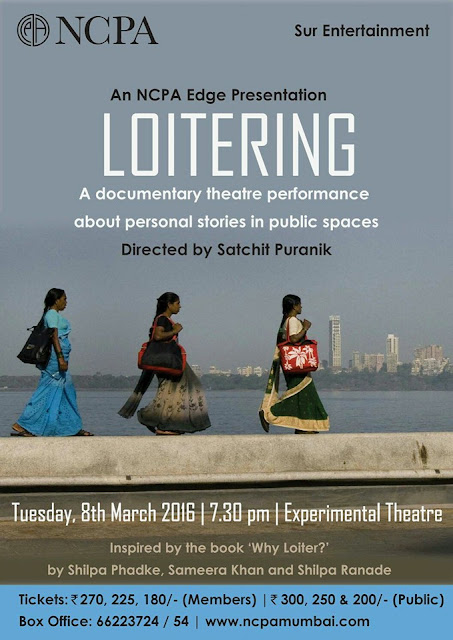 I am sure when the authors of the book 'Why loiter?' were writing it they hadnt thought the ideas they were penning were going to turn into a movement. And when I started the movement 'Why loiter?' in Mumbai I had no idea people in other cities would make their own loitering groups. And I definitely did not think that after almost two years of loitering, someone would propose to make a play about it. A play purely celebrating the joy of loitering, by people of all shapes, ages and sizes. 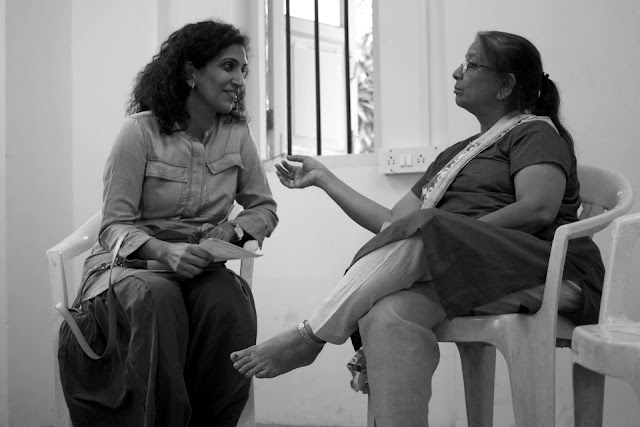 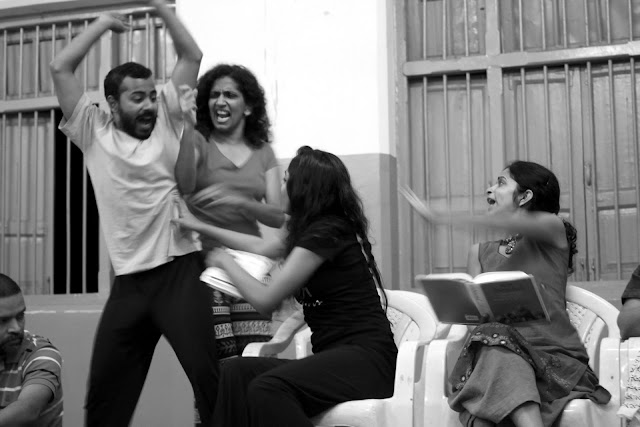 Satchit Puranik, a theatre colleague and co loiterer proposed the idea of making a play around the themes mentioned in the 'Why loiter?' book, the experiences of the women that are part of the 'Why loiter?' movement, and his own personal learning journey associated with years of travel in and outside the country. Satchit also participated in the Why loiter? walks whenever he was allowed. When we invited men to come dressed in women's clothes and walk with us, Satchit dressed up in a shimmery long skirt and a low cut blouse and came. 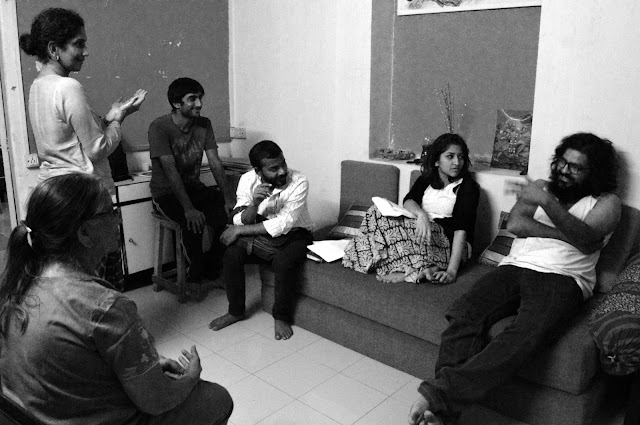 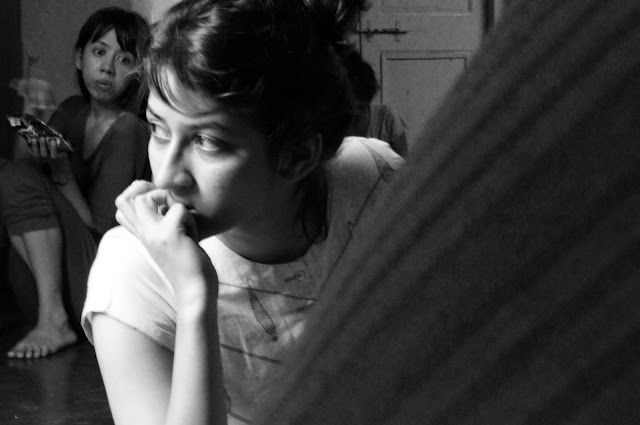 But I had no idea what was in store when Satchit began working on the play. The first day when I went to see the rehearsals, I was refreshed to see lots of people that are essentially non actors. This eclectic cast included a ,Gujarati world class tabla player, Maharashtrian couple in their mid sixties, a Malayali single mom of two young daughters, a young storyteller who is also a mother of two, an eighteen year old kathak dancer, a 30 year old Muslim rapid sketch artist from Aligarh, a young office going girl from Nagaland, and a kallari payattu martial artist from Uttar Pradesh and two young Mumbai girls, one a gujarati and the other a Sindhi, to help with the direction and the production. two young men helping us with music, sound and art, again from diverse backgrounds. I was awestruck with this wonderful and experimental cast, and I knew instantly that this was going to be a fun roller coaster ride. 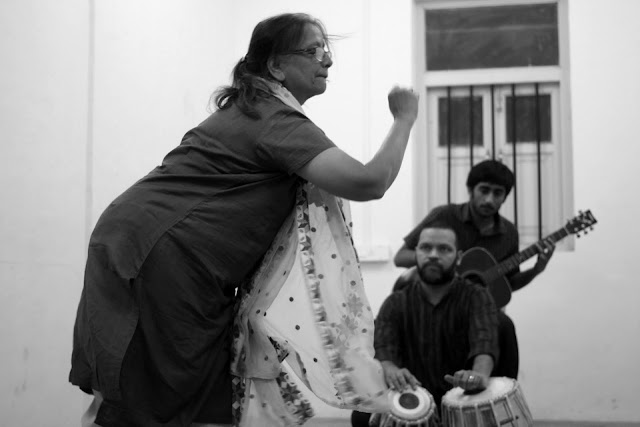 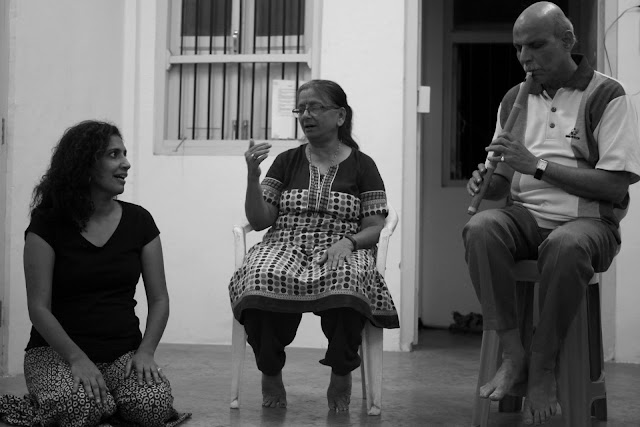 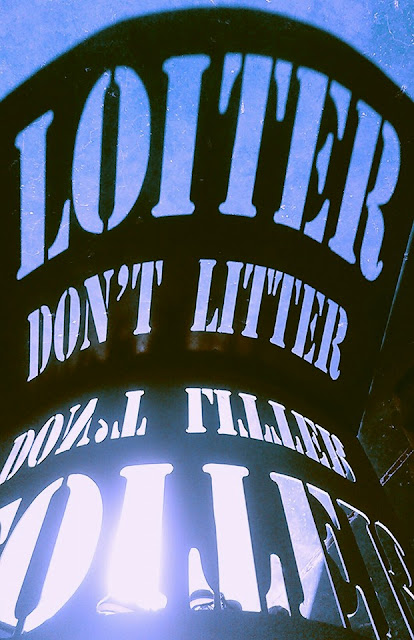 This was going to be a DOCUMENTARY THEATRE piece, where people come on stage as themselves and share their own personal stories, of course, with artistic and dramatic embellishments, but essentially its non-acting.
The stories that emerged were priceless. The rehearsal space turned into a safe space to share our most intimate stories of being in public spaces, over the years. We shared experiences of being on roads, in buses, in trains, in different cities of India, during the day and the night, with people or without, as men and women, as young adults and children and grown ups.
Patterns emerged, of societal norms of being 'safe', 'protected', being feminine and masculine, what it means to be a woman in our country and what it means to be a man. Both equally stifling.
Our own mini rebellions and transgressions of rules and feeling of being heroic when all you had done was cross the road to drink chai at a chai stall on the pavement. 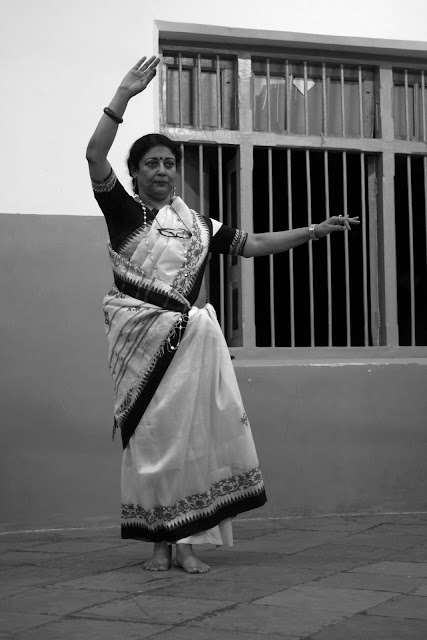 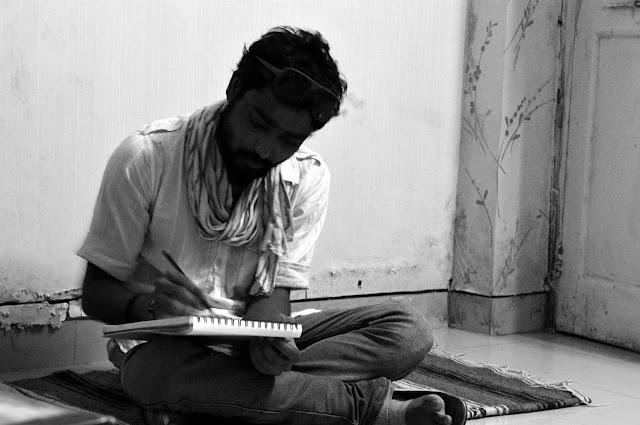 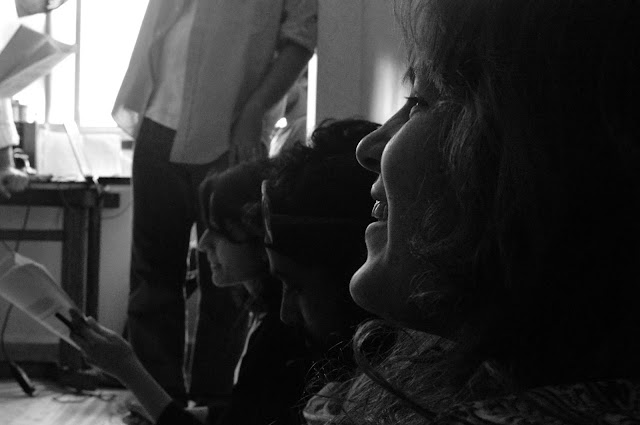 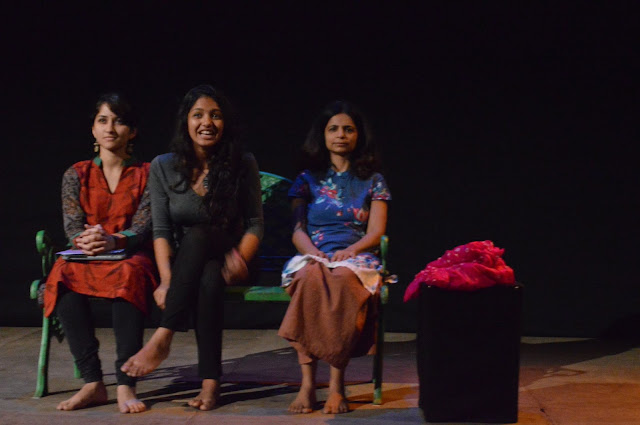 We discovered what is called the 'Ganika Gat' or the walk of the courtesan, at one point an integral part of Kathak but not a single teacher teaches this to his/her students anymore. There is no mention of the Ganika Gat online and no research material. Satchit tracked down one of the few remaining Kathak dancers who knows the form and had long discussions with her about the seduction attached to the walk of the courtesan and how a woman's walk in a public space can never be removed from what it means to the male observer.
We shared what it means to be a woman cycling down a Mumbai road, with men leering, honking, pointing and behaving in extremely juvenile ways.
There were a few disturbing stories too. Like a girl getting harrassed in the most disgusting way on Holi, which is a major Hindu festival, especially celebrated with enthusiasm in the North of India. Stories of women being burnt for stepping outdoors and women taking inspiration from buffaloes, that loiter uninhibitedly on the roads, of what it means to finally have two free hands because you are no longer mobilizing your dysfunctional knee with your hand, the pressures on a boy to turn into a 'man' by his own male family members, the sign board outside an 'Art of living' center that banned menstruating from entering the prayer hall because when you pray your energy is 'going up' and when you are menstruating your energy is 'going down' etc etc.
It was a difficult task to weave all these stories together in a play and Satchit made good use of poem, one of them by our lovely young supporter from Pakistan, Hira Yousuf's 'You are not allowed' and others by well known poets like Vinod Kumar Shukl and Paash. 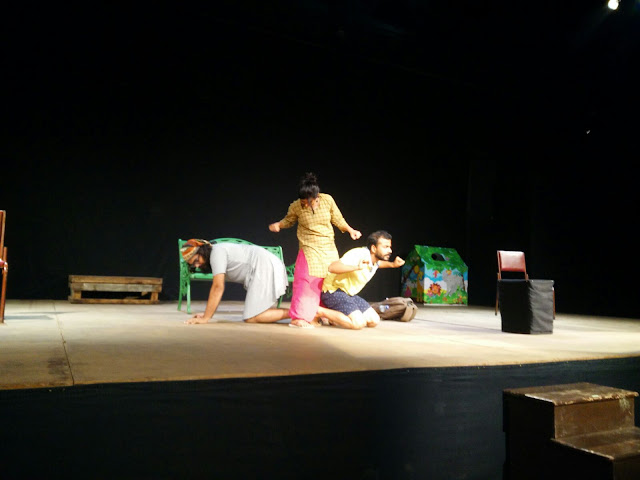 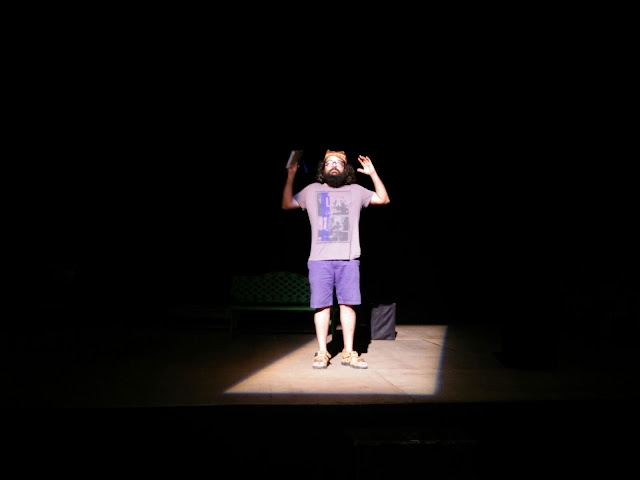 The cast wore their own personal clothes, clothes they liked best or those colours that represented the nature of their stories and personalities. In fact, the stories all fell under the nine moods, or the navrasas that is spoken of in the Natyashastra. Stories of courage, of romance, of horror, of happiness, of motherhood, anger, sadness, peace etc.
The rapid sketch artist, Satchit decided would keep making sketches of people in the audience or people on stage as and when he felt like, onstage, of course. Satchit himself decided to dress in women's clothes for the show. We were taking several unique risks, like making panipuri on stage, offering and drinking chai on stage and all inviting the audience on stage to loiter with us.
Finally the show day arrived. 8th March, Women's Day. We were lucky to have two great producers, Amrita Dodani and NCPA Edge.
Hearts were aflutter, considering the form 'documentary theatre', and all the other risks involved. But as soon as the play started, all the nervousness disappeared. The audience was with us from the word go and connected with all the real stories of women and men loitering in cities and towns of India. The authors of the book 'Why Loiter?' had come to watch as well. At the end when the audience was invited to come on stage and loiter with us, almost everyone came on stage, tasting the panipuri and the chai (the official food and beverage of loitering) and mingling freely with the artists and other audience members. 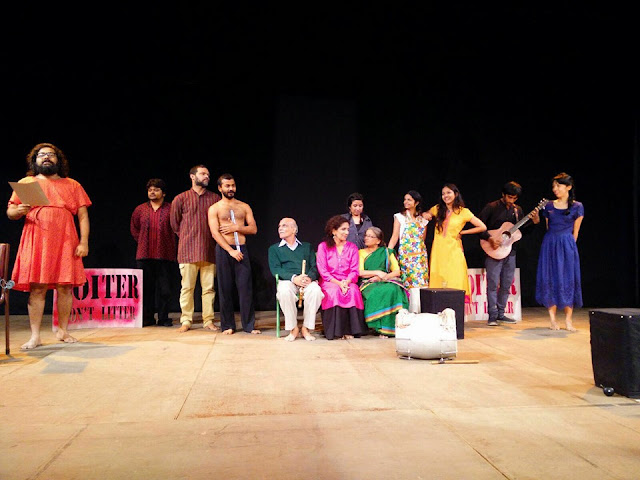 That is when we realized that we had successfully made the point we had in mind. Here we were, the lines between audience and artists blurred, everyone connecting with one another on the experiences we have all had loitering or at least trying to loiter, and the joy it brings to each one of us. We surely planted the seeds of unapologetic, aimless, joyous loitering firmly into the minds of the audience. 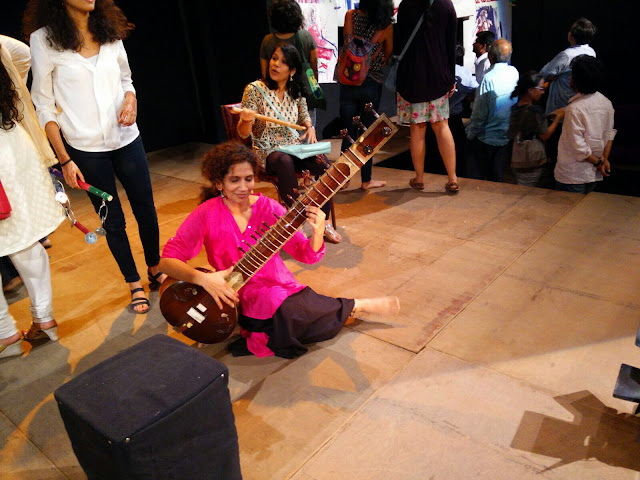 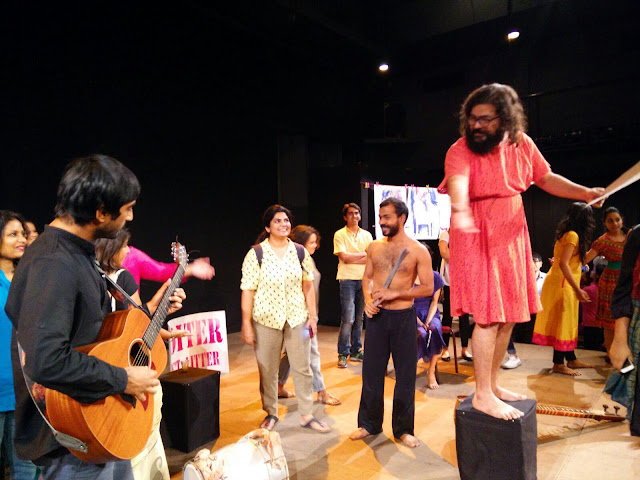 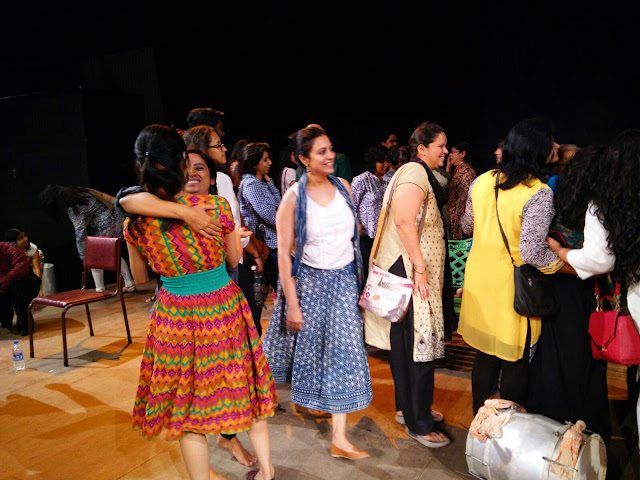 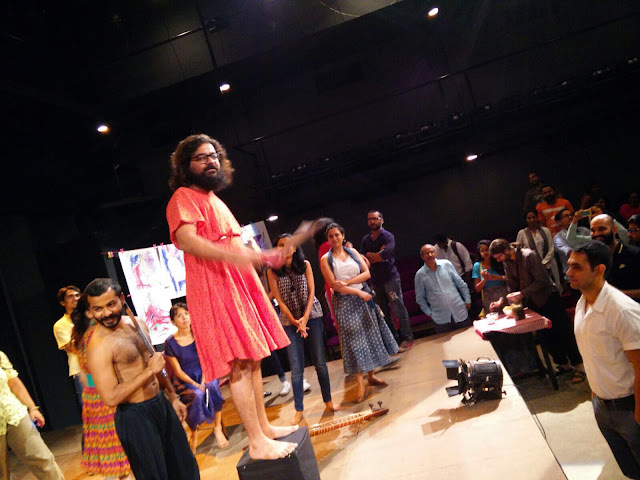 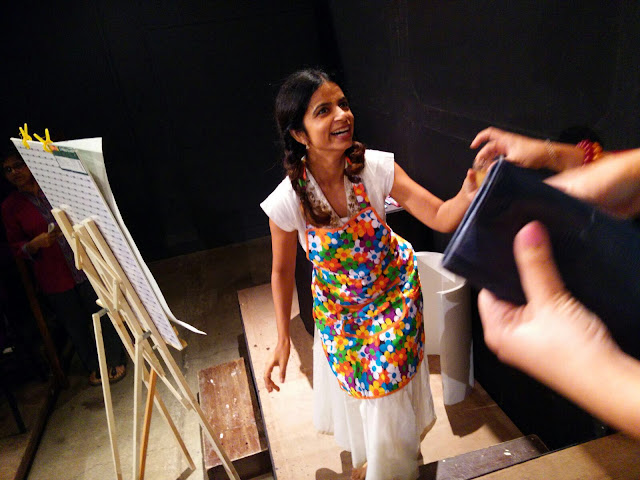 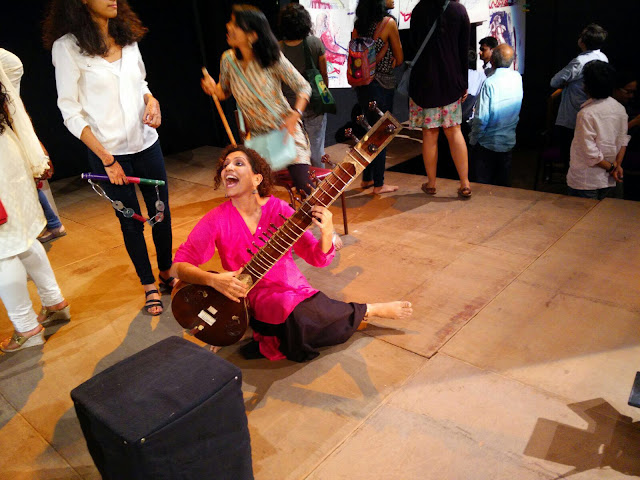 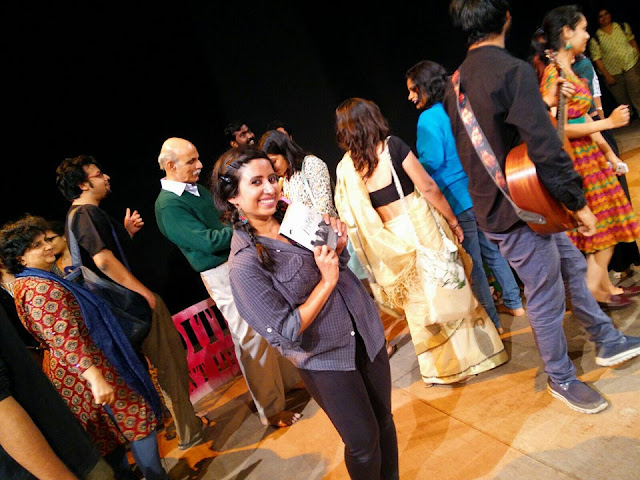