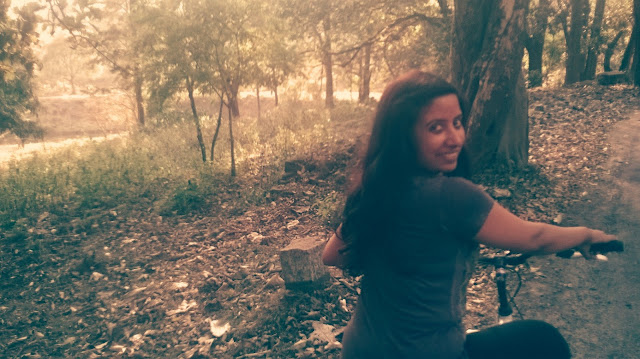 I have recently acquired a brand new, red, semi-expensive bicycle. I had wanted to get one for a long time. A lot of my fondest childhood memories revolve around my BSA SLR cycle that I had as a child. My father had taught me how to ride it when I was seven years old and since we lived most of my growing up years in small towns and cities, I always had quiet, safe streets to ride my cycle. Apart from serving recreational purposes, it was my vehicle to school, to the swimming pool or the badminton court, to tuition classes in the evenings and  going to friends' places. I remember knees that were constantly in bandages from the countless number of times I had fallen off my bicycle too, but that never ever discouraged me from getting on it and experiencing freedom that only a teenager on a cycle can understand.

Somewhere in the chaos of college, moving to bigger cities in pursuit of education and job, hectic lifestyle and crowded roads, I lost touch with my cycle. I am embarrassed to say that I don't even know what happened to my BSA SLR cycle. Whether my parents gave it away, left it in the junkyard or sold it off second hand. I have no clue!

Last month I bought a new bicycle, and I can safely say it is one of my best purchases in the last few years. I use it to go almost everywhere. I love the feeling of the sweat on my brow and the energy in my legs as I peddle along the cars and scooters. I love the fact that I can turn my cycle towards the beach or the panipuri stall or just stop to look at the cakes on display at the pastry shop without having to piss off the autorikshaw guy or creating a traffic jam. My cycle has reconnected me to the freedom and impulsiveness that I felt as a child on my bike.

What has been a brand new experience, however, is the whole new gamut of street harrassment I face on my cycle as a grown up. 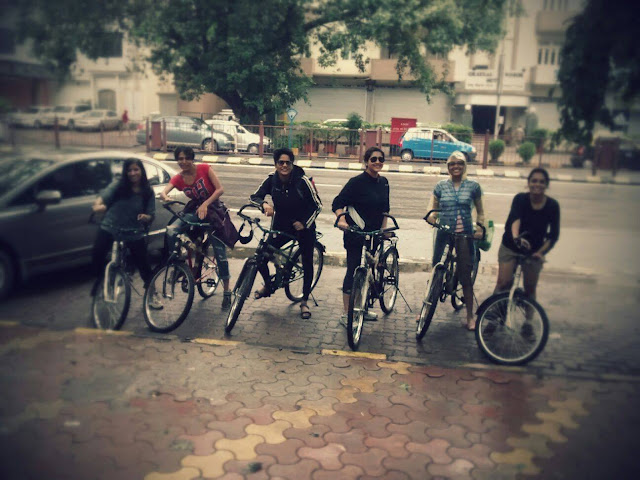 Most of the times men give me strange looks and stare when I go by on my cycle. Sometimes they bring their cars and motorcycles really close to my cycle as I am riding and honk loudly to get my attention. Then when I do look at them, they grin or stare or make singing noises and then zoom past. This behaviour cuts across ages, class and I am guessing, religion. Young boys standing outside their schools and colleges point at me and laugh, while older men walking past or in cars and on scooters stare incessantly.

Once I was going past a posh mall in Malad (west) in the suburbs of Bombay and a bunch of young men dressed in expensive clothes and shoes, all wearing expensive shades laughed at me and made incoherent verbal comments as I cycled past on a hot afternoon. 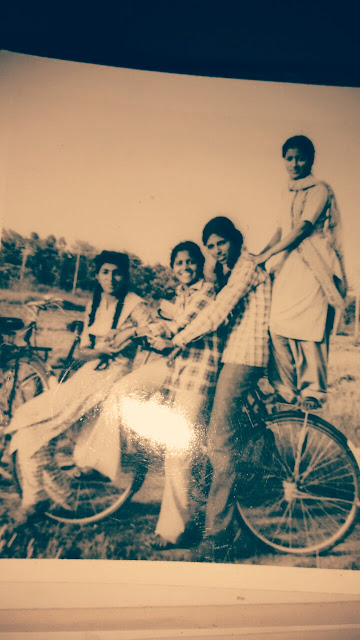 Once I was cycling in Andheri and this man in a car slowed up close to me and said 'licence number?'. I looked at him curiously. What pleasure did he get out of saying that? After asking me 'licence number?' he drove off, grinning creepily.

The most hilarious part is, I often get men ON CYCLES themselves looking at me and passing comments as though I am doing something really bizarre.

I am still trying to understand what makes it so weird for men to see a woman on a cycle minding her own business. I thought maybe it is because it is rare. Possible. In a month I have seen only about seven or eight girls on bicycles and all of them were school/college students. So then is it weird for men to see a grown woman on a cycle? Maybe. Then why isn't it weird for men to see men on cycles? Because I have noticed MANY men on cycles in this one month. Does it make me more vulnerable to be on a two wheeler that goes much slower than a scooty, for example, and much more 'uncovered' than an autorikshaw/taxi/car. 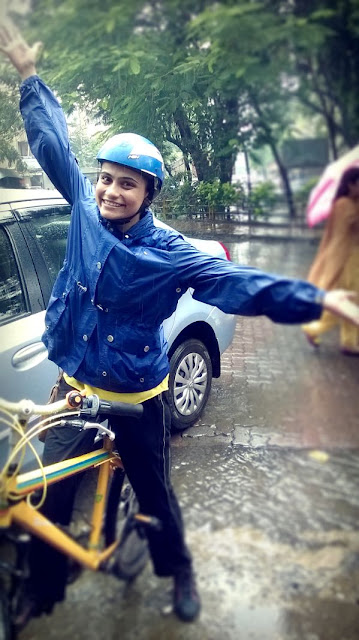 Sometimes I feel like a clown, going by the number of men that laugh at me when I cycle past them, and I am happy I can provide comic relief to men that obviously need some kind of therapy. But I also wonder that if a woman on a cycle can be such a hilarious sight, why don't I evoke any laughter from women that I go past? Why am I funny only to men? Also, even if men do find the sight of a woman on a cycle peddling along funny, why do they point at me and laugh in my face. I mean, do they do that when someone falls on the road? That is pretty slapsticky too, right?

Anyhow, over the days I am getting a feeling that the comments, the laughs, the insensitive pointing and requests of racing are a collective brotherhood trying to make the sight of a grown woman on a cycle 'extinct' from the current situation of 'rare'. 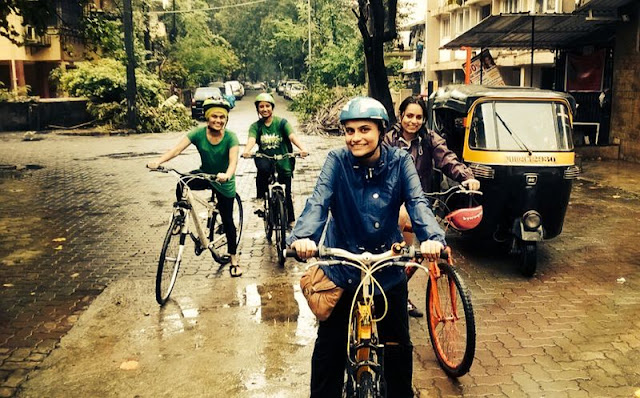 Some of my friends also tell me that they have faced similar experiences when they jog/practice yoga/exercise/swim in public spaces. So, forgive my extrapolating, but then is this specific sexual harrassment a way to tell women that they should not/cannot be as physically strong or endure as much as men? Or atleast they shouldnt try doing it unless it is a structured event like a marathon or a cycle race.

Well, these are just theories I am trying to mull over as I happily peddle past these harrassers. I couldn't care less or be bogged down by these incidents. My reconnect with my childhood is far more precious. But I really wonder when these men will grow up. Its high time.

To sign off with another bewildering experience, just today I was cycling home from work and a big SUV type car was parked on the side of the road. A young boy of around 18 and a middle aged man were standing resting their backs on the car. When they saw me coming up the road on my cycle, they started smiling at me. When I got closer, the older man pointed at me and said 'Puncture! Puncture!'. I looked down at the front tyre as I rode ahead. No puncture. I looked at the rear tyre. No puncture there either. I turned my cycle around and went back to the car. This time I noticed the saffrom flag with a roaring tiger on the dashboard. I also noticed the saffron T shirts the men wore under their shirts. This was an official Shiv Sena car.

I asked the man , "what were you saying when I rode past?"
After getting over the shock of a woman actually confronting him on a road, he said, "I was saying your cycle might get punctured.'
I said, "Why?"
"It could get punctured, you know. Like, if you ride over a nail or something."
I said, "your car could also get punctured, do people come in front of your car and say 'puncture, puncture' to you?
He said, "I just wanted you to be careful"
I said, "and what makes you think I am not?"
He said, "I was saying it for your own good."
I said, "I thnk you should leave people to figure out whats good and whats bad to themselves."
He said, "I think I made a big mistake by saying something for your own good."

That is when I realized that this Shiv Sainik in an S.U.V was just a symbol of the stifling patriarchal, misogynistic country we live in where men harrass women and later claim they were doing it 'for our own good' and had absolutely nothing to do with their concern and everything to do with their complete unacceptability of women's physical/mental independence and strength. A woman on a cycle is too much of an attack on the Indian man's fragile notions of masculinity and femininity.

Here's hoping for a country full of women on cycles helping men break that notion. Enjoy the breeze in your hair as you peddle on. 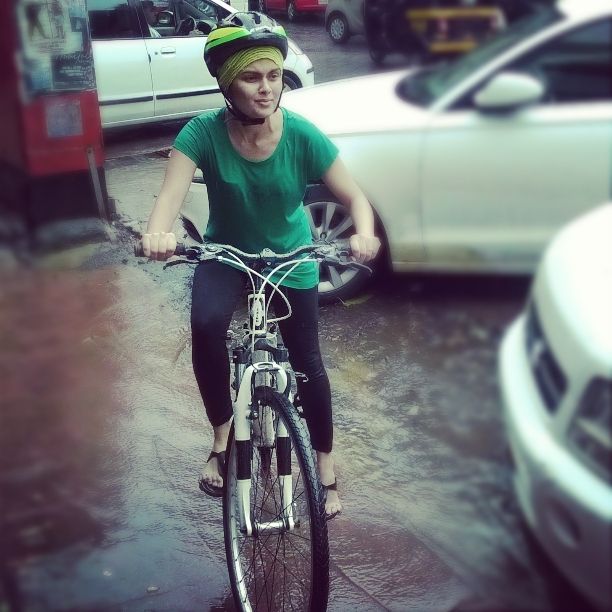